A general cargo vessel finished loading a cargo of cement in the early morning hours and the deck crew were cleaning cement dust from the top of the cargo hatch coamings. This task had to be completed and the hatch covers replaced prior to sailing. At about 0900, the Master was informed that the berth was required for another vessel and the vessel’s sailing time had been brought forward by about 2 hours.

When the Master told the C/O of the revised plan, the C/O advised that he would need all available hands to complete the cleaning operation and requested that the 2/O, who was resting, be called back on deck.

The C/O could not see the 2/O was in a dangerous position, and drove the crane aft. The 2/O screamed out in pain as he was trapped and crushed between the hatch covers and the crane’s ladder access platform. The C/O stopped and then reversed the crane. As the crane moved forward, the 2/O was rolled between the crane’s ladder platform and the hatch covers and then fell off the coaming onto the walkway below, striking his head on the guardrails on the side of the walkway.

The deck crew immediately commenced cardio-pulmonary resuscitation. About 20 minutes after the accident, two emergency medical teams, including a doctor, arrived at the scene and took over the resuscitation efforts. Later, the victim was declared deceased due to internal bleeding from organ rupture 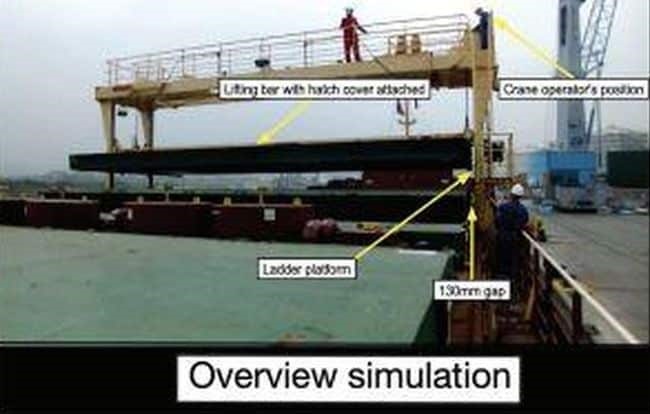 1. The victim was crushed because he attempted to walk between the vessel’s gantry crane and a stack of cargo hold hatch covers.

2. The C/O did not know that the victim was under the crane or what his intentions were because he was focused on raising the crane’s lifting bar. The toxicology report showed that the victim had more than twice the legal limit of alcohol in his bloodstream. Almost certainly the consumption of alcohol was a significant contributory factor in this accident.

3. The safety culture on board the vessel was weak. Personnel were working close to moving equipment and unprotected edges, and were not wearing adequate levels of PPE. Also, alcohol consumption on a ship cannot usually go undetected. If this behaviour is tolerated then the conditions are set for a major undermining force in the safety culture on board.

2. It goes without saying that alcohol consumption above the limits set for all mariners via STCW is to be condemned. Many companies have now adopted ‘dry-ship’ practice in order to help in the practical management of this norm.

3. The amount of Blood Alcohol Concentration (BAC) allowed differs from company to company, where some allow maximum of 0.04% (During off hours) whereas others prefer 0% BAC. Lately, most of the companies have totally banned possession and consumption of alcohol on board their ships.

4. A strong safety culture is not a guarantee of zero accidents, but it is a bulwark against many potential bad outcomes.

5. In this instance it was found that emergency stops for the gantry crane were not in sufficient number and those that were installed were badly positioned.

6. Random alcohol and drugs testing of officers can also be done on board ships to ensure that there is no breach in the policy.

7. Nowadays, most of the shipping companies provide Alcohol test meters (Intoximeter) on board so that ship’s captain or senior officers can check any crew member suspected of having high level of alcohol in his system and is incapable of carrying out his duties.

8. In case alcohol is allowed on ships, purchase of the same is allowed only from the master’s bond and bringing alcohol on board ships is strictly prohibited.